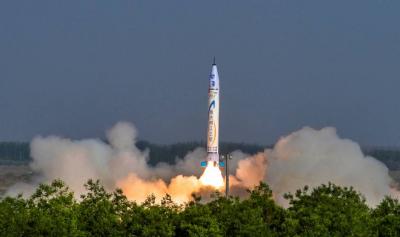 BEIJING, May 17, 2018 (BSS/AFP) - A suborbital rocket was launched into space Thursday by a start-up in China's burgeoning commercial aeronautics industry, as private firms snap at the heels of their dominant American rivals.

OneSpace, the Beijing-based start-up behind the launch, is one of dozens of Chinese firms jostling for a slice of the global space industry, estimated to be worth about $339 billion by Bank of America Merrill Lynch and currently dominated by US firms SpaceX and Blue Origin.

Its nine-meter (30-foot) "Chongqing Liangjiang Star" rocket took off from an undisclosed test field in China's northwest and reached an altitude of 273 kilometres (170 miles) before falling back to Earth, the company said in a statement.

The launch aimed to demonstrate an early working model of the company's OS-X series of rockets, designed to conduct research linked to suborbital flights.

By the end of the decade OneSpace expects to build 20 of the OS-X rockets, which would be capable of placing 100-kilogramme (220-pound) payload into an orbit 800 kilometres from the Earth's surface, said company spokesman Chen Jianglan.

The firm is also developing another type of rocket, the M-series, to compete in the growing microsatellite sector.

These small satellites are typically no larger than a shoebox and are used to monitor crops, weather patterns or disaster sites or used by universities for research purposes, according to Jonathan McDowell, an astronomer at the Harvard-Smithsonian Center for Astrophysics.

Microsatellites are cheaper to build and easier to deploy than traditional truck-sized versions and their launch has become increasingly an lucrative market, currently dominated by the Indian space program.

Chinese aerospace start-ups were eschewing the space travel ambitions of their US rivals to compete for these lucrative microsatellite contracts, said McDowell.

SpaceOne's work has attracted the attention of several domestic and foreign clients, Chen told AFP, adding that "a number of satellite companies in Europe and Asia have approached us to establish strategic partnerships".

Once dominated by state research agencies and the military, China allowed private companies to enter the space industry to build and launch satellites in 2014.

Another Chinese start-up, iSpace, launched a suborbital rocket, the Hyperbola-1S, from a test field in the southern island of Hainan last month.

The rocket reached an altitude of 108 kilometres and served as a demonstration for its planned small launcher due to be completed by June 2019, the company's website said.

But Onespace maintains that their Thursday launch was the "first" privately-designed rocket, since its rocket was "designed from scratch" and had "stronger control capabilities" than the Hyperbola-1S