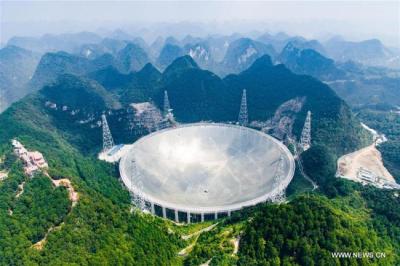 BEIJING, May 20, 2018 (BSS/XINHUA) - China's Five-hundred-meter Aperture Spherical Radio Telescope (FAST), the world's largest single-dish radio telescope, will have with a new receiver installed to boost its efficiency in surveying the sky.

The 19-beam L-band receiver, first of its kind worldwide, is expected to be put into use in early June and it will increase FAST's survey speed by five to six times, according to Friday's Science and Technology Daily.

The receiver was jointly developed by scientists from China and Australia. It weighs 1.2 tonnes and cost over 20 million yuan (about 3.14 million U.S. dollars).

Jin Chengjin, chief engineer of FAST's receiver system, said the new receiver has the highest sensitivity and will greatly improve FAST's efficiency in searching for new pulsars and spectral lines.

Located in a natural, deep round karst depression in Guizhou Province, southwest China, FAST is believed to be the world's most sensitive radio telescope.

Its tasks include observation of pulsars, exploration of interstellar molecules, and monitoring interstellar communication signals.