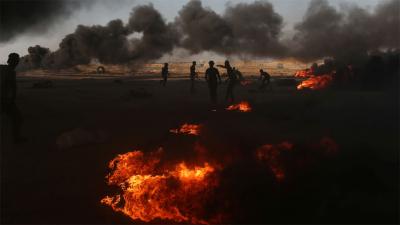 GAZA CITY, Palestinian Territories, May 17, 2018 (BSS/AFP) - A senior member of Gaza's Hamas rulers has said that all but a dozen of the 62 Palestinians killed by Israeli fire during Gaza border protests this week were members of the Islamist group.

The remarks made on Wednesday were seized upon by Israel in an attempt to fend off harsh global criticism over the deaths and prove they were orchestrated and led by the Islamist movement Hamas.

Israeli forces killed 60 Palestinians on Monday when tens of thousands of Palestinians had gathered near the border, while smaller numbers approached the fence and sought to break through.

For more than six weeks, marchers have been demanding the right to return to their homes seized by Israel in the 1948 war surrounding the creation of the Jewish state.

Two more Palestinians were killed on Tuesday as Palestinians marked the Nakba, or "catastrophe", commemorating the more than 700,000 Palestinians who fled or were expelled in the war.

The bloodshed continued to draw world attention as violence abated late Wednesday, on the eve of the holy Muslim fasting month of Ramadan.

Sporadic cross-border fire was a reminder of the situation's unresolved volatility, however.

Pope Francis said he was "very worried" by escalating violence in the Middle East, with Arab foreign ministers set to hold an "extraordinary" meeting Thursday to discuss the situation.

And Hamas strongman Yahya Sinwar warned the movement could return to armed resistance.

Meanwhile Turkish President Recep Tayyip Erdogan lashed out at the international "silence" over the Gaza killings.

"If the silence on Israel's tyranny continues, the world will rapidly be dragged into a chaos where banditry prevails," he said.

Since border protests and clashes began on March 30, 116 Palestinians have been killed by Israeli fire across the Gaza Strip.

One Israeli soldier has been reported wounded in that time.

Monday's protests coincided with the transfer of the US embassy in Israel from Tel Aviv to Jerusalem, which has deeply angered the Palestinians who see the Israeli-annexed eastern sector of the city as the capital of their future state.

Hamas said it supported the mass mobilisation of protesters, insisting however it was a peaceful civilian initiative.

The Israeli army accuses Hamas of using the cover of the demonstrations to approach and damage the border fence, including laying explosive devices and attacking soldiers, and insists its actions are necessary to defend the border and prevent mass infiltrations.

There have been numerous calls for an independent investigation into the deaths, with Britain, Germany and Switzerland among those supporting such action.

Canadian Prime Minister Justin Trudeau also called for an independent probe Wednesday, saying "it is imperative we establish the facts of what is happening in Gaza".

Egyptian President Abdel Fattah al-Sisi said Egypt was in communication with both sides "so that this bloodshed would stop".

A senior member of Hamas said most of the Palestinians killed by Israeli fire during border protests and clashes this week were members of the Islamist group.

"Fifty of the martyrs were Hamas and 12 from the people. How can Hamas reap the fruits if it pays such an expensive price?" said Salah Bardawil.

He did not give further details about whether they were members of the group's armed or political wing, or what they were doing at the time they were killed.

The comments were welcomed by Israeli military spokesman Lieutenant Colonel Jonathan Conricus, who said Bardawil had "set the record straight".

"Take his word for it. This was no peaceful protest," he tweeted.

"I cannot agree with the fact that dozens of peaceful civilians, including children and infants, who were killed in these incidents were terrorists," he said.

"We have sent clear messages to the enemy via many international and regional leaders that if the blockade continues we will not hesitate to use military resistance," he said. - 'Wrong side of history' -

Guatemala on Wednesday inaugurated its Israel embassy in Jerusalem, the first country to follow in the footsteps of the United States' controversial move.

Speaking at a reception with Guatemalan President Jimmy Morales, Netanyahu said Israel had recorded "similar numbers" to those mentioned by Bardawil. "Israel will continue to defend itself in all necessary means and not let those who call to destroy us breach our borders and threaten our communities," he said.

The US and Guatemalan embassy moves break with decades of international consensus.

Senior Palestinian official Saeb Erekat lashed out at Guatemala, saying its government had "chosen to stand on the wrong side of history".

Jerusalem's status is perhaps the thorniest issue in the Israeli- Palestinian conflict and the US embassy relocation infuriated the Palestinians.

Israel considers the entire city its capital, while the Palestinians see east Jerusalem as the capital of their future state.