BJP candidate to take oath as chief minister in Karnataka 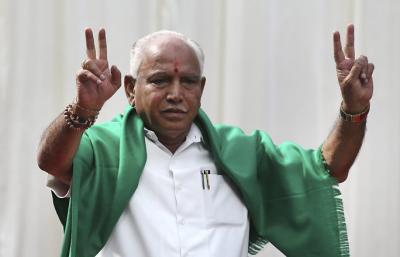 Amidst high-pitched political drama witnessed over the past two days in the state capital Bengaluru, the BJP's Karnataka state unit tweeted on Wednesday night that "Yeddyurappa will take oath as Chief Minister of Karnataka this morning at 9.00 am. The movement to build our Karnataka has started."

An official communique signed by Governor Vajubhai Vala directed Yeddyurappa to seek a vote of confidence on the floor of the state legislature within 15 days of assumption of office as the chief minister of Karnataka.

Both the INC and the JD(S) have formed an alliance and staked the claim before the state's Governor Vajubhai Vala to form the next government in the state.

However, the governor invited Yeddyurappa to form the next government and take oath as the new chief minister on Thursday.

On the other hand, INC and JD(S) approached the country's apex court seeking an urgent hearing for a direction to the governor to invite the alliance with 116 members of legislative assembly (MLAs), more than the simple majority mark.

Their petition before the apex court described the governor's decision of inviting Yeddyurappa to form the next government as "unconstitutional, illegal and arbitrary."

If Yeddyurappa takes oath Thursday he will be the chief minister for the third time. He had held the post for seven days in 2007, and then for three years beginning May 2008.