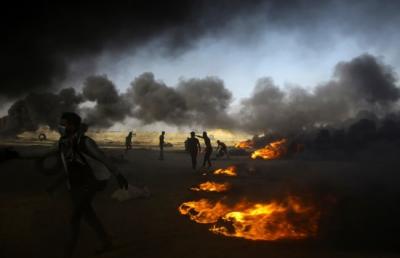 GENEVA, May 18, 2018 (BSS/AFP) - The UN Human Rights Council will meet Friday to decide whether to send international war crimes investigators to probe the deadly shootings of Gaza protesters by Israeli forces.

The special session of the UN's top rights body will consider a draft resolution calling for the council to "urgently dispatch an independent, international commission of inquiry", the UN's highest level investigation.

The special session comes after a month and a half of mass protests and clashes along the Gaza border, calling for Palestinian refugees to be able to return to their homes now inside Israel.

The largest demonstrations coincided with the move of the US embassy in Israel from Tel Aviv to Jerusalem on Monday, which saw Israeli forces kill some 60 Palestinians, pushing the overall toll well over 100.

Israel has justified its actions, saying they are necessary to stop mass infiltrations from the blockaded Palestinian enclave run by Islamist movement Hamas.

The draft resolution discussed Friday, presented by Pakistan on behalf of the Organization of Islamic Cooperation and backed by 47 UN member states, said the investigators should look into "all violations of international humanitarian law and international human rights law ... in the context of the military assaults on large scale civilian protests that began on 30 March 2018".

It said the aim should be to "establish the facts and circumstances" around "alleged violations and abuses including those that may amount to war crimes and to identify those responsible".

The special session of the council came at the request of Palestine and the United Arab Emirates, on behalf of Arab countries in the council, the UN said earlier this week.

In addition to the Arab countries, China, France, Brazil, Sweden, and Switzerland were among the 51 countries who supported the special session.

The UN human rights chief Zeid Ra'ad Al Hussein is expected to speak at the opening of the session, as is the UN Special Rapporteur on the situation of human rights in the occupied Palestinian Territory.