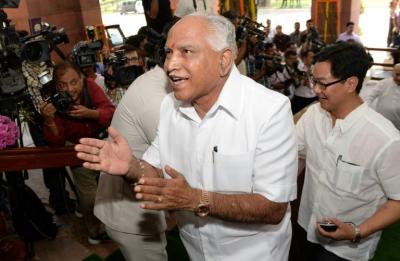 NEW DELHI, May 18, 2018 (BSS/AFP) - India's Supreme Court ordered Prime Minister Narendra Modi's party to hold a vote of confidence Saturday in a key state where it has been allowed to form a government despite its lack of a majority.

The order heightened political tensions in Karnataka and the opposition Congress party moved its lawmakers to luxury hotels outside the state to make sure they were not tempted to switch sides.

But it was left short of a majority in the 224-member state assembly. Congress, whose numbers were slashed from 122 to 78 seats, formed a coalition with a regional party and insisted they should form a government as they have 115 members.

The state governor, a former BJP leader, controversially gave Modi's party the first chance to form a government, sparking the political storm that went to the Supreme Court.

"The test will be as per the rules of the house. There will be no secret ballot," the Supreme Court justices said.

Lawyers for B.S. Yeddyurappa, the BJP's chief minister, had requested until Monday to be able to prove it has the numbers to form a government. They had also wanted a secret ballot.

Yeddyurappa took an oath of office on Thursday after a special pre-dawn Supreme Court sitting rejected a Congress move to block the ceremony.

"We are going to get full majority," Yeddyurappa told reporters after Friday's ruling.

If the BJP loses the vote his administration would collapse.

Congress and its ally Janata Dal (Secular) have accused the ruling party of trying to bribe their members to win support.

Janata Dal leader H.D. Kumaraswamy, the opposition's chief ministerial candidate, accused the BJP of offering $15 million each to lawmakers from his party. The BJP strongly denies the claims.

Congress and Janata Dal moved all their assembly members to luxury resorts and hotels in Hyderabad in neighbouring Telangana state. Reports said their mobile phones had been confiscated so they could not be contacted by rivals.

One Congress lawmaker was reported missing and the party said he had been "abducted by the BJP".

Switching parties is common in Indian politics where allegations of bribes to lure candidates candidates are commonplace.

Congress president Rahul Gandhi has branded the BJP's actions a "mockery of our constitution" while BJP leader Amit Shah decried the Congress tactics as "a murder of democracy".

The Supreme Court said it would rule later whether the governor's decision to let the BJP form a government was unconstitutional.

Karnataka, which includes the global IT hub of Bangalore, was the last major state held by Congress.

Losing the state would undermine Congress claims to lead any political alliance against the BJP in a general election next year.