Trump 'demands' probe of alleged spying on his campaign 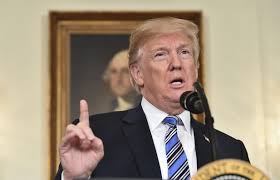 WASHINGTON, May 21, 2018 (BSS/AFP) - US President Donald Trump demanded Sunday that the Justice Department investigate whether his presidential campaign was "infiltrated" or spied on for political purposes, prompting it to announce it would look into those issues.

Trump has described the infiltration allegations as being potentially "bigger than Watergate," but Democrats say he is attempting to undermine the year-old investigation into Russian interference in the 2016 election and possible collusion with his campaign, headed by special counsel Robert Mueller.

"I hereby demand, and will do so officially tomorrow, that the Department of Justice look into whether or not the FBI/DOJ infiltrated or surveilled the Trump Campaign for Political Purposes - and if any such demands or requests were made by people within the Obama Administration!" Trump tweeted.

Trump's angry order came amid building pressure from the year-old Russia meddling investigation, and as US media reported that the Federal Bureau of Investigations sent a Britain-based American professor to speak separately with Trump campaign advisers in 2016.

A New York Times report described the professor as "an informant," saying the federal agency was looking into evidence that Carter Page and George Papadopoulos had suspicious contacts with Russia.

The Washington Post called him "a longtime US intelligence source," and said he met with a third campaign adviser -- Sam Clovis -- as well as Page and Papadopoulos.

Trump and his supporters have cast the man as a mole possibly sent by the Obama administration to burrow into his campaign.

The Justice Department tasked its internal watchdog with looking into the issues raised by Trump.

But it paired that inquiry with an existing "review" of the application process for FISA national security warrants, which Republicans allege was abused in connection with the surveillance of Page.

"The department has asked the inspector general to expand the ongoing review of the FISA application process to include determining whether there was any impropriety or political motivation in how the FBI conducted its counterintelligence investigation of persons suspected of involvement with the Russian agents who interfered in the 2016 presidential election," spokeswoman Sarah Isgur Flores said in a statement.

Deputy attorney general Rod Rosenstein, who oversees the Russia investigation, said: "If anyone did infiltrate or surveil participants in a presidential campaign for inappropriate purposes, we need to know about it and take appropriate action."

While Trump allies in Congress have demanded more information about the informant, law enforcement officials have refused, saying the source -- not yet officially identified -- could be in danger if named.

Efforts to identify the FBI informant -- and Trump's claims -- have drawn fire from Democratic lawmakers.

"It would be at best irresponsible, and at worst potentially illegal, for members of Congress to use their positions to learn the identity of an FBI source for the purpose of undermining the ongoing investigation into Russian interference in our election," said Senator Mark Warner, the Senate Intelligence Committee's top Democrat.

"Trump's claim of an embedded 'spy' is nonsense. His 'demand' DOJ investigate something they know to be untrue is an abuse of power, and an effort to distract from his growing legal problems," tweeted Adam Schiff, the ranking Democrat on the House Intelligence Committee.

Joaquin Castro, another House Democrat, responded to Trump's demand for Justice Department action by tweeting: "@realDonaldTrump - Let Mueller do his job. Stay out of it. You need to be subpoenaed for obstruction of justice/conspiracy/money laundering."

Trump lawyer Rudolph Giuliani, a former Justice Department prosecutor and assistant attorney general, told CNN on Friday that it was unclear whether an FBI informant had been embedded in the campaign, while adding that the agency "should tell us if there was."