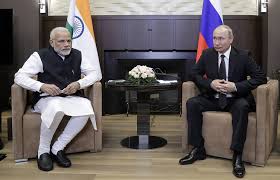 "They discussed the entire spectrum of our privileged strategic partnership (this is how relations between Russia and India are described). Special attention was focused on economic cooperation. They noted stable growth in bilateral trade," he said.

The minister cited official statistics demonstrating a 20-percent growth in Russian-Indian trade in 2017 and a 40-percent growth in the first months of the current year. According to the Russian top diplomat, the two leaders discussed possible steps to be taken to ensure the economic component of an upcoming summit to be held in India in early October.

"There are serious plans for further cooperation between our oil corporations, I mean first of all, Rosneft, which has gained a stronghold on the Indian market," he said, adding that Russia's gas giant Gazprom had updated its LNG agreement with Indian partners. Besides, Gapromneft has "interesting plans" too, he noted.

Other topics included high technologies and nuclear energy, he added. Security in the Asia-Pacific Region

Putin and Modi have come out for non-bloc architecture of security in the Asia-Pacific Region, he went on.

"A great deal was said about the trends we observe in the Asia-Pacific Region," he said. "Both President Putin and Prime Minister Modi were adamant a new architecture of security and cooperation in the Asia-Pacific Region should be based on non-bloc principles, openness, and equitable and indivisible security. The trends that can be observed in the Eurasian continent were mentioned precisely in this fashion."

Lavrov said the two sides had noted with satisfaction the completion of formalities in contacts between India and the EAEU.

"The beginning of talks on creating a free trade zone of the EAEU and India is scheduled for autumn," he added.

In Lavrov's opinion all these processes match well the current developments within the framework of the Shanghai Cooperation Organization and the relations developing between our countries and the ASEAN member-states.

"It is a major Eurasian project, as President Putin once described it. It is an imperative of the course of life. It does not shut the door to anyone and remains open to all countries, which in this fast geopolitical space can cooperate to mutual benefit," he said.

Lavrov went on to say that Russia and India had discussed other aspects of cooperation in international affairs, including that in the United Nations, the troika Russia-India-China, the BRICS group and the SCO.

"Preparations were discussed for the forthcoming SCO summit, due in China's Qingdao in early June," he said, adding that a number of documents were to be signed at the meeting. Russia and India would pay special attention to the program for action in the struggle against extremism, separatism and terrorism.

Lavrov said that Russia had reaffirmed his support for the Indian initiative, being discussed in the United Nations for a comprehensive convention on struggle against terrorism.