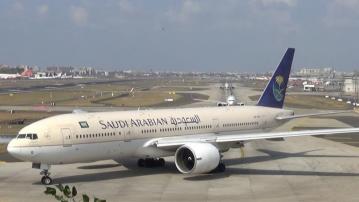 RIYADH, May 22, 2018 (BSS/AFP) - A Saudi Arabian Airlines Airbus A330 jet made an emergency landing in the western Red Sea city of Jeddah, injuring 53 people, aviation officials said on Tuesday.

The Saudia aircraft was travelling from the Muslim holy city of Medina to Dhaka with 151 people on board, but had to be diverted to Jeddah late Monday after it suffered a malfunction in the hydraulic system, the kingdom's Aviation Investigation Bureau said.

Footage posted online showed the plane leaving a trail of flame along the runway as it skidded on its nose before screeching to a halt.

"The passengers were evacuated by emergency slides. 52 of them were slightly injured, while one female passenger suffered a fracture during the evacuation and is now receiving treatment," AIB said in a statement.

"AIB has launched an investigation into this accident."

The aircraft circled over Jeddah for several hours as its landing gear failed to drop, forcing the captain to make the emergency landing, Saudi media reported.

In a similar incident in January 2014, a Saudi Arabian Airlines Boeing 767 jet made an emergency landing in Medina, injuring 29 people, according to the aviation authority.