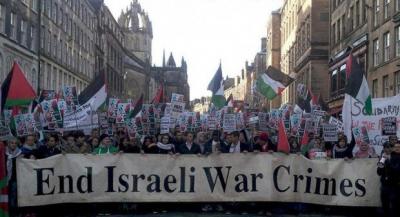 THE HAGUE, May 22, 2018 (BSS/AFP) - The Palestinian foreign minister on Tuesday called on the International Criminal Court "to open an immediate investigation" into war crimes and apartheid against the Palestinian people.

Riyad al-Maliki met for an hour with the ICC's chief prosecutor Fatou Bensouda at the tribunal in The Hague, "to refer the situation in Palestine to her office.

It was an "important and historic step towards justice for the Palestinian people who continue to suffer ongoing, widespread and systematic crimes," he told reporters afterwards.

The ICC launched a preliminary probe into allegations of war crimes and crimes against humanity in Israel and the Palestinian territories in 2015.

But it has yet to move to the next stage and open a full-blown investigation which could possibly lead to charges being brought.

"This step pursues justice by demanding accountability," said Maliki, adding those "responsible for the crimes, highlighted in the referral, must be held accountable for their actions without further delay".

The meeting at the ICC comes amid heightened tensions in the Israel- Palestinian conflict, after more than 60 Palestinians protesting the US decision to move its embassy from Tel Aviv to the disputed city of Jerusalem were killed by Israeli fire last week.

Maliki said the Palestinian move came "due to the intensity and the rate and the severity of the crimes against our people" including the targeting of "unarmed protestors in the Gaza Strip".

The Palestinian referral highlighted the issue of settlements, which the delegation termed in a statement "the single most dangerous threat to Palestinian lives and livelihoods".

"Israel maintains, expands and protects the settlement regime by committing war crimes, crimes against humanity and the crime of apartheid against the Palestinian people," the statement added.

Amid much controversy, the Palestinian Authority joined the ICC in January 2015 signing up to the Rome Statute which underpins the world's only permanent war crimes court.

But Israel is not a member of the ICC, and the Israeli foreign ministry on Tuesday said it "takes a severe view" of the referral, which it called "a cynical step without legal validity".

"The ICC lacks jurisdiction over the Israeli-Palestinian issue, since Israel is not a member of the court and because the Palestinian Authority is not a state," the Israeli ministry added in a statement.

Bensouda vowed last week that she was watching the unrest in Gaza closely and would "take any action warranted" to prosecute crimes.

"The violence must stop," she told AFP, urging "all those concerned to refrain from further escalating this situation and the Israel Defence Forces to avoid excessive use of force."