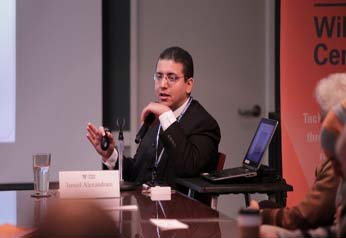 CAIRO, May 23, 2018 (BSS/AFP) - An Egyptian military court has sentenced Ismail Alexandrani, a prominent journalist and expert on jihadist movements in the Sinai peninsula, to 10 years in prison, his lawyer and a military judicial official said.

Alexandrani, who was arrested in November 2015, was accused of publishing military secrets and belonging to the banned Muslim Brotherhood, his lawyer Tarek Abdel Aal told AFP Tuesday.

He was also accused of spreading information that could harm national security outside the country in interviews with the media and in articles, his lawyer added.

Abdel Aal said they will appeal the verdict.

Alexandrani had been in pretrial detention for two and a half years since his arrest in the Red Sea resort of Hurghada after he returned from a work trip in Berlin.

An expert on jihadist movements in North Sinai, where security forces are fighting an insurgency led by the Islamic State group, Alexandrani had been to Germany to deliver lectures on the political situation in Egypt, his wife Khadija Gaafar had said at the time.

Alexandrani was also known for his anti-regime writings and for criticising the military's role in politics, and was a contributor to publications including the French online magazine Orient XXI, which confirmed his sentencing on Twitter.

Co-defendant Walid Mohareb was also sentenced to 10 years in prison in the same trial, which included 18 others who were being tried in absentia, Abdel Aal said.

"It's also a reminder that the government seeks to keep army abuses of Sinai residents away from media scrutiny," she said.

Sisi was elected a year after he led the July 2013 military overthrew of his Islamist predecessor, Mohamed Morsi, amid mass protests against him.