Speculation mounts over US push for Iran regime change 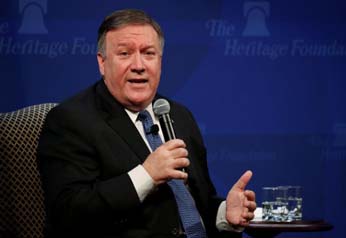 WASHINGTON, May 23, 2018 (BSS/AFP) - Speculation is swirling over the prospect of US willingness to push regime change in Tehran, as US officials including Washington's top diplomat urge Iranians to "choose for themselves" their government.

"The Iranian people get to choose for themselves the kind of leadership they want," Secretary of State Mike Pompeo said Tuesday after outlining a day prior aggressive measures designed to counter Tehran, including what he dubbed the "strongest sanctions in history."

Pompeo has made similar comments in recent days. Experts consider the remarks as admission of a strategy that aims to trigger the collapse of the regime born out of the 1979 Islamic Revolution that shattered US-Iranian relations.

State Department spokeswoman Heather Nauert said US "policy is not regime change" -- but made clear the United States would "welcome" a new era in Tehran.

"If the Iranian people were to choose, somewhere down the road, to make their views known, they're certainly welcome to do so," she said.

"The Iranian people for far too long have lived under a regime that has mistreated its people."

President Donald Trump had already raised the specter of regime change when he announced the US would pull out of the Iran nuclear accord earlier this month, saying Iranians "deserve a nation that does justice to their dreams."

Trump's personal attorney Rudy Giuliani also told exiled Iranian opposition figures "we have a president who is as committed to regime change as we are."

The prospect finds support from neoconservative circles, and remains charged in the US since the 2003 military intervention that toppled Saddam Hussein -- a move now widely considered a blunder, including by Trump.

Foreign policy analysts have noted the appointment of so-called "hawks" to key positions, including Pompeo and John Bolton, the national security advisor.

Both have advocated for regime change in the past.

"I'm convinced that the people of Iran, when they can see a path forward which will lead their country to stop behaving in this way, will choose that path," Pompeo said.