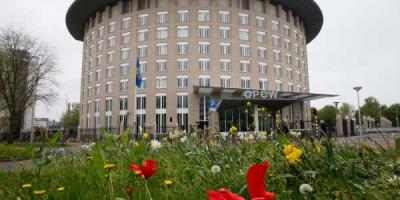 THE HAGUE, May 23, 2018 (BSS/AFP) - The Palestinians have joined the global convention to halt the spread of toxic arms, the Organisation for the Prohibition of Chemical Weapons (OPCW) announced on Wednesday.

"The state of Palestine deposited on 17 May 2018 its instrument of accession to the Chemical Weapons Convention," the OPCW, based in The Hague, said in a statement.

"This means that Palestine will become the 193rd state to join the CWC" when its accession enters into force on June 16, 2018, an OPCW official told AFP.

The chemical arms watchdog said its technical secretariat received a notice from UN Secretary-General Antonio Guterres last week to inform it that the Palestinian authority has "deposited its instrument of accession".

Palestinians are campaigning for the creation of their own state of Palestine, and have stepped up a campaign in recent years to win recognition from international organisations.

Israel however is vehemently opposed to these attempts and has pursued intense diplomatic efforts to stop them.

In 2012, the United Nations upgraded the Palestinians to a non-member observer state. Interpol, the International Criminal Court, UNESCO, and now the OPCW all refer to the Palestinian territories as a state.

According to the Palestinian foreign ministry, they have joined or signed up to more than 50 organisations and agreements.

Only four countries, including Israel, have yet to sign up to the CWC, which aims to eliminate an entire category of weapons of mass destruction.

It prohibits the development, production, acquisition and stockpiling of chemical weapons by its member states.

The announcement comes in the wake of a visit by Palestinian officials Tuesday to the Hague-based International Criminal Court, where they urged its prosecutor to probe alleged war crimes committed against Palestinians by the Israeli state.