Brazil close to paralysis as truckers press on with strike 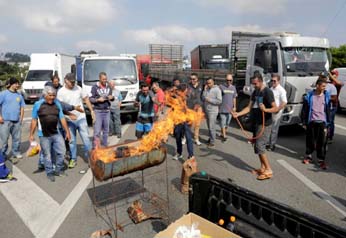 BRASILIA, May 25, 2018 (BSS/AFP) - Brazil appeared on the verge of a standstill on the fourth day of a nationwide truckers' strike Thursday as road blockades caused severe shortages of fuel and food, despite a move by the state-owned oil company to defuse the crisis.

As the government and transport unions continued to seek a solution -- after over five hours of talks -- airports and gas stations were running out of fuel, food prices were spiraling and agricultural exports were hit.

Truckers have attempted to put a stranglehold on movement of goods in Brazil to protest fuel price rises.

The increases are the result of a politically sensitive decision made in late 2016 to allow the Petrobras oil giant autonomy over its pricing, as well as a rise in world prices in recent weeks.

But the determination of the truckers has caught center-right President Michel Temer's government flat-footed, five months ahead of presidential elections.

Petrobras yielded to pressure on Wednesday and temporarily reduced fuel prices, sending its shares plunging by around 14 percent on the Sao Paulo stock market by close on Thursday. But the truckers Thursday were blocking main arteries in 26 of the 27 states in the vast country, which has only limited rail services.

In the port of Santos near Sao Paulo -- the largest in Latin America -- there have been virtually no arrivals or departures of trucks for three days, the management said, even if the "loading and unloading operations of ships continues normally" for now.

In the capital Brasilia, the airport was allowing only planes to land that had enough fuel to take off again, and schools were closed.

At five other airports, including Recife in the northeast and Congonhas in the economic capital of Sao Paulo, fuel reserves could run out on Thursday, the G1 news site said.

Prices of fruits and vegetables were rocketing in some places to 400 percent, due to supply problems.

Pump prices were also higher, and long lines formed at many gas stations.

A spokeswoman for Rio's fuel retailers' union Sincomb told AFP that the main service stations were last supplied on Monday.

"There is a lack of fuel in practically all the service stations that we have contacted," she said.

As a way of defusing an increasingly out-of-control situation, Petrobras Wednesday announced a temporary price reduction of 10 percent.

"It is a one-off measure. It doesn't represent a change in pricing policy," Petrobras chief Pedro Parente told journalists. "These are 15 days for the government to reach a deal with the truckers."

But the head of the Abcam truckers' association, Jose de Fonseca Lopes, was unimpressed. "It is not what we need," he told CBN radio.

The movement appeared to have some popular support.

"I think that this has been provoked by poor management by the federal government," said Ana Maria Lobo, a driver waiting in line at a gas station in Sao Paulo, who also noted "all these corruption scandals."

In another temporary measure, the lower house of congress decided late Wednesday to suspend the introduction of two taxes on diesel until the end of the year.

If the Senate approves the measure Thursday, the truckers "are ready to suspend the movement" said Fonseca Lopes.

But the spokeswoman of the National Transport Confederation (CNT) told journalists Thursday that blockades would continue until the president signs the measure into law.

The proposed suspension of the diesel taxes has sparked tensions within the government.

"There is no agreement yet. I am not against it but I would like to know where the money is coming from," said the minister in charge of relations with parliament, Carlos Marun.