N. Korea open to US talks 'any time' despite Trump axing summit 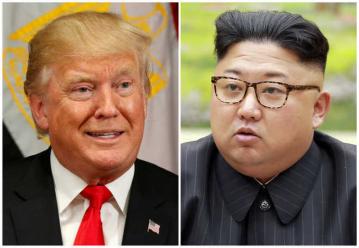 SEOUL, May 25, 2018 (BSS/AFP) - North Korea said Friday it is willing to talk to the United States "at any time" after President Donald Trump abruptly cancelled a summit, a decision that once more casts a pall of uncertainty over the the turbulent Korean peninsula.

Trump blamed "open hostility" from the North Korean regime for his decision to call off the planned talks with Kim Jong Un, and warned Pyongyang against committing any "foolish or reckless acts."

In a personal letter to Kim, Trump announced Thursday he would not go ahead with the June 12 summit in Singapore, following what the White House called a "trail of broken promises" by the North.

Pyongyang's immediate reaction to the sudden U-turn was conciliatory.

Just before Trump announced the cancellation of the talks, North Korea declared it had "completely" dismantled its nuclear test site in the country's far northeast, in a carefully choreographed goodwill gesture ahead of the summit.

But the chances of success for the unprecedented face-to-face had recently been thrown into doubt as threats were traded by both sides.

"Sadly, based on the tremendous anger and open hostility displayed in your most recent statement, I feel it is inappropriate, at this time, to have this long-planned meeting," read Trump's letter to Kim.

But he said talks could still go ahead "at a later date".

The decision blindsided treaty ally South Korea, which until now had brokered a remarkable detente between Washington and Pyongyang.

Unification Minister Cho Myoung-gyon said Seoul would continue talking to Kim's regime which he believed "remains sincere in implementing the agreement and making efforts on denuclearisation and peace building".

UN Secretary-General Antonio Guterres urged the parties to keep talking, as did host Singapore, while Russia's President Vladimir Putin held out hope that dialogue would resume and the talks would eventually take place.

Japan said it would maintain "close cooperation" with the United States and South Korea.

Politically, Trump had invested heavily in the success of the planned summit. But as the date drew nearer, the gulf in expectations between the two sides became apparent.

But Pyongyang has vowed it will never give up its nuclear deterrent until it feels safe from what it terms US aggression.

A senior White House official said Pyongyang had demonstrated a "profound lack of good faith" in the run-up to the summit -- including standing up the White House's deputy chief of staff, who had travelled to Singapore for preparatory talks.

The White House viewed North Korea's objection to a routine US-South Korean joint military exercise -- and its recent cancellation of a meeting with the South Koreans -- as a breach of its commitments leading up to the summit.

It also was unhappy about the North's failure to allow international observers to verify the dismantling of its Punggye-ri test site, the staging ground for all six of its nuclear tests which was buried inside a mountain near the border with China.

But the North's Kim Kye Gwan countered that their angry statements were "just a backlash in response to harsh words from the US side that has been pushing for a unilateral denuclearisation".

Both Pence and Trump's hawkish National Security Advisor John Bolton had recently raised the spectre of Libyan leader Moamer Khadafi, who gave up atomic weapons only to die years later at the hands of US-backed rebels.

Experts warned that cancelling the meeting could have knock-on effects, especially among allies already rattled by Trump's unpredictability.

"In a contest of who can be the most erratic leader, President Trump beats Kim Jong Un hands-down," Joel Wit, founder of the respected 38 North website which monitors North Korea, wrote on Twitter.

"His unsteady hand has left everyone scratching their heads, including our ROK (South Korean) allies."

But others said Trump's willingness to walk away could extract further concessions from Pyongyang.

"North Korea will have to propose more detailed plans for denuclearisation if it wants to talk in the future," Go Myong-hyun, an analyst at Asan Institute of Policy Studies, told AFP.