Berlin braces for rival demos as far-right takes to streets 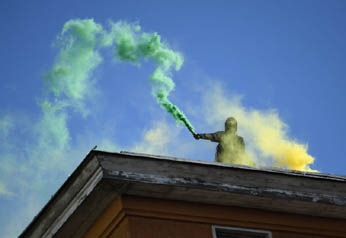 BERLIN, May 27, 2018 (BSS/AFP) - Thousands of anti-racism campaigners, left-wingers and techno lovers are expected to pack the streets of Berlin on Sunday to protest a rally called by the far-right AfD party, with police deploying in force to keep the peace.

Uniting under the banner "Stop the hatred", counter-demonstrators say they want to drown out the march by the anti-immigration, anti-Islam Alternative for Germany (AfD).

But AfD members have accused some opponents of threatening to use violence.

The party's "Future of Germany" march, slated to start outside Berlin's main train station at midday (1000 GMT) and end at the iconic Brandenburg Gate, marks the first public show of strength by the nationalist outfit since it became the largest opposition party.

Scheduled to address the crowd are top AfD'ers Joerg Meuthen and Alexander Gauland, who regularly rail against Chancellor Angela Merkel's decision to allow in large numbers of mostly Muslim refugees at the height of Europe's migrant crisis.

"We want to show everyone that along with millions of Germans across the country we are worried about Germany's future," Berlin AfD chief Georg Pazderski told a pre-march press conference.

Pazderski said many still feared being "stigmatised" for showing their AfD colours, even after the party took nearly 13 percent of the vote and won its first seats in the national parliament in last year's elections.

If confirmed, the AfD turnout could be dwarfed by a slate of counter-demos.

The most eye-catching promises to be a huge dance party by over 100 clubs from Berlin's legendary techno scene, who want to use boats on the river Spree and a convoy of trucks to "bass away" the AfD.

"The Berlin club culture is everything that Nazis are not," they said in a statement.

"We are progressive, queer, feminist, anti-racist, inclusive, colourful and we have unicorns."

More than 9,000 dance fans have said they will attend, according to the event's Facebook page.

Thousands of others have vowed to join a mass anti-AfD protest organised by a collection of groups including political parties, unions, student bodies, migrant advocates and civil society organisations.

"We won't leave the streets to the AfD," said Nora Berneis of the "Stop the hatred, stop the AfD" alliance.

Although the vast majority of counter-demonstrators are expected to be peaceful, members of the far-left extremist Antifa movement have on their website called for "chaos", urging sympathisers "to sabotage the AfD rally using all necessary means".

Berlin police said they plan to deploy 2,000 officers, drafted in from across Germany, to prevent clashes and any attempts "to block the right to free speech".

Founded in 2013 as an anti-euro party, the AfD rose to prominence by capitalising on widespread anger over the arrival of over a million asylum seekers in Germany since 2015.

It now holds more than 90 seats in the Bundestag where its presence has changed the tone of debate.

Just this month, AfD co-leader Alice Weidel earned herself a formal rebuke from the parliamentary speaker for describing immigrants as "headscarf girls, welfare-claiming, knife-wielding men and other good-for-nothings".

Merkel's left-right coalition government has responded to the AfD's rise by tightening asylum policies, but the party continues to climb in opinion polls -- exposing the divisions in German society.

In a sign of the simmering tensions, lawmaker Renate Kuenast of the opposition Greens party was deluged with thousands of hateful comments after posting a video online urging people to join Sunday's anti-AfD demos.

The posts included rape threats and calls for her to kill herself.

Kuenast responded with a second Facebook video in which she vowed to file complaints against the worst messages, and said nothing would deter her from marching.

"I am now more than ever calling for people to join us in demonstrating on Sunday," she said.