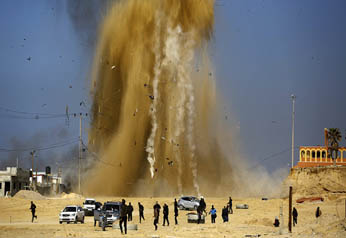 GAZA CITY, Palestinian Territories, May 27, 2018 (BSS/AFP) - Israeli aircraft struck two Hamas targets in the Gaza Strip on Saturday night, but there were no immediate reports of casualties, Palestinian security sources in the coastal territory said.

One of the targets, in the southern town of Rafah, was a facility of the Islamist movement's military wing, the Ezzedine al-Qassam Brigades, the sources said. The other they described only as a Hamas site in the centre of the strip.

The Israeli military said in a statement that its "fighter jets struck military targets in a compound belonging to the Hamas terror organisation in the southern Gaza Strip".

It did not confirm a second raid.

The statement said that the operation was in response to a brief incursion across the Gaza border earlier in the day by Palestinian protesters who immediately fled back into Palestinian territory.

It added that it that the strike was also in retaliation for repeated Palestinian attempts to damage the border fence and "security infrastructure" during ongoing border protests.

At least 116 Palestinians have been killed by Israeli fire in the Gaza Strip since mass protests broke out on March 30, according to newly-released figures from the health ministry in the Hamas-run strip.

Low-level demonstrations along the border have continued since protests peaked on May 14, when at least 61 Palestinians died as tens of thousands of Gazans protested while the US moved its embassy from Tel Aviv to Jerusalem.

Israel says its actions are necessary to defend the border and stop mass incursions into its territory. It accuses Hamas, with whom it has fought three wars since 2008, of seeking to use the protests as cover to carry out violence.