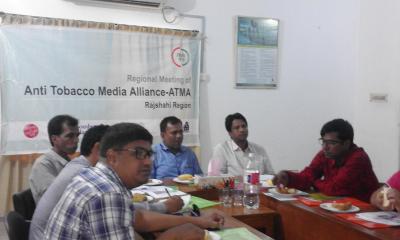 RAJSHAHI, May 17, 2018 (BSS)-Regional members of Anti Tobacco Media Alliance (ATMA) here today resolved that an increased tobacco control social and media campaign could be the crucial means of enforcement of the tobacco control law in addition to reduction of tobacco uses.

They also voiced for imposing more taxes on tobacco products for reduction of tobacco usage as substantial and sustainable reduction of its uses can be the vital means of freeing the public health from various non-communicable diseases including cancer, stroke and heart attack.

The observation came at the ATMA's Rajshahi regional meeting titled "Imposing Specific Excise Taxes on All Tobacco Products" held in the conference room of Association for Community Development (ACD) in the city .

During his concept paper presentation, ACD Advocacy Officer Shariful Islam Shamim put forward the demand of imposing higher taxes on tobacco products. He called for a specific tax policy on tobacco to reduce its consumption significantly.

Taking part in the discussion, the ATMA members expressed their grave concern over gross violation of tobacco control law and urged the authorities concerned to take punitive measures to resist the violation.

The government has amended the law to make it more stringent because of growing tobacco use in the country.

The main attraction of the landmark law is that it bans all sorts of tobacco advertisements at the point of sale and sponsorships of the industries.

The law also bans the selling of cigarettes to those below 18. The anti- tobacco activists viewed the retailers and other vendors concerned should abide by the law of the tobacco control to protect the public health from bad effect of both smoke and smokeless tobacco products.

Depicting the present market scenario they opined that tobacco products advertisements through packet display at all selling points and unabated marketing of foreign branded cigarettes are taking place everywhere violating the law.

They also mentioned that selling of tobacco products especially cigarettes to the schoolchildren and smoking in public places and transports are continuing.