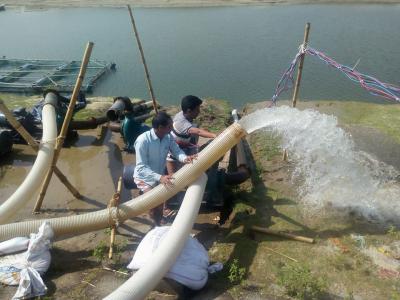 RAJSHAHI, May 18, 2018 (BSS)-Farmers have harvested more paddy yield through river water irrigation than the conventional irrigation of deep tube well (dtw) water in Barind area of Rajshahi during the current Irri-Boro season.

That's why river water irrigation has been gaining popularity among the farmers in high Barind tract, lessening gradually mounting pressure on underground water.

"I have harvested 24 mounds of paddy from one bigha of land with river water irrigation," said Md Jabu, a farmer of Bhatupara village under Godagari upazila. The yield was against 19.5 mounds paddy from the same area land with dtw irrigation in the adjacent locality, he said.

Shariful Islam, another farmer of Baliaghata village, got 25.5 mounds of paddy with river water irrigation while his dtw irrigated land gives yield of 20 mounds.

Haider Ali, 43, of Bhatopara village under Godagari upazila, is now also happy over irrigation by using river water in the current Irri-boro season.

Like them, river water irrigation has made more than 6,500 farmers happy in the high Barind area as their dependence on deep tube wells and rainfall has been reduced to some extent.

River water is enriched with humus which is important to boost soil fertility along with increasing crop yield. So, the farmers are happy over getting chances of river water irrigation round the year, he added.

Meanwhile, farmers set up 21 pumps in seven points of Padma, Mohananda and Punarbhaba rivers in Rajshahi and Chapainawabganj districts, lifting river water and supplying those to the farmlands through 41,050 feet long pipelines.

Integrated Water Resource Management (IWRM) Project established the infrastructures with financial support of Swiss Agency for Development and Cooperation- SDC in order to make the farmers habituated to irrigating their farmlands with river-water.

DASCOH Foundation and Swiss Red Cross have jointly been implementing the IWRM project in 35 UPs and four pourasabhas in the two northern districts since 2015.

Habibur Rahman, chairman of Basudevpur Union Parishad, said many of the hand-driven tube wells become out of order during dry season when the deep tube-wells remain functioning.

He said the odd situation poses a serious threat to the living and livelihood condition of the people particularly the poor and ethnic minority. So, there is no alternative but to use river water to protect the aquifer.

Referring to various research findings, Professor Chowdhury SarwarJahan of Department of Geology and Mining in Rajshahi University said around 3,000 liters of water needs to produce one kilogram of paddy.

Stressing the need for environment-friendly more irrigation schemes like IWRM, he said there is no alternative but to promote surface water based irrigation to protect the groundwater resources.

Utmost emphasis should be given to protecting the surface water resources from pollution so that those could be used as irrigation to reduce the pressure on underground water, Prof Chowdhury opined.