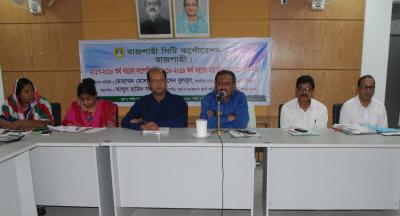 The corporation also intends to construct 12 roads of 60 feet-wide, a five star hotel and a specious playground through expanding its area of more than 100 squire-kilometers.

RCC authority revealed this at a budget formulation meeting at the City Bhaban conference hall here on Thursday afternoon.

The meeting was told that physical infrastructure works of footpath and road construction are underway in Rajshahi city with the main thrust of making its pedestrian movement unhindered together with ensuring a clean environment.

There will be no road and street without footpath in the metropolis. Thereby, pedestrian movement will be easier side by side with ensuring beautification. All the footpaths will be decorated with colourful tiles in phases.

The venture will be the epoch-making step of the city's development field upon successful completion of the works within near future. More than 32,000 poor and slum households are provided sanitation facilities by commissioning of 11,000 hygienic latrines in the metropolis.

Similarly, they are getting facilities of safe drinking water from 2,300 tube-wells installed in the slum areas besides different other settlement improvement privileges like footpaths and drains.

The city corporation is also implementing a project titled 'Zero soil' to cover all the available top soils with green and various trees. More than 14,000 Neem tree saplings were distributed among school students free of cost for the purpose.