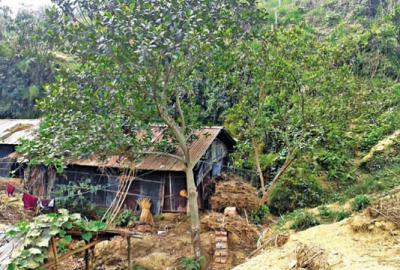 CHATTOGRAM, May 20, 2018 (BSS)- Chattogram District Administration in the backdrop of heavy shower today started eviction of the residents of 100 unauthorized makeshift houses on the hillocks and risky places at Railway Toton Housing area in the city.

The eviction team also slashed the supply of electricity and water to the houses during the drive.

Assistant Commissioner (Land), Sadar circle, Sheikh Jobaer Ahmed led the eviction drive in the slopes of different risky hills including railway colony area of Akbarshah in the city around 11 am.

The district administration along with the Department of Environment (DoE),WASA representatives, police personnel, representatives of Chattogram City Corporation, Chattogram Development Authority, Bangladesh Railway, Fire Service and electricity departments and other concerned departments were present during the eviction drive.

The district administration came up with the move in order to avert possible loss of lives from landslides in the monsoon as the soil on the hills become softer and may trigger a landslide, posing threat to the lives of the poor people dwelling on those risky hills pockets during the rainy season.

Sheikh Jobaer Ahmed, after the eviction drive, told journalists that despite several notices served from the district administration, the families were still living in the hills in a very dangerous state.

The authorities would gradually evict all families living in different risky hills in the city, he added.