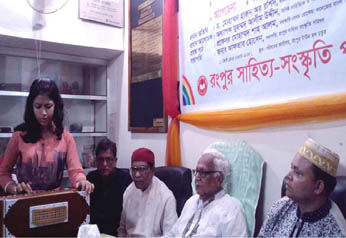 RANGPUR, May 26, 2018 (BSS) - Literary personalities at a discussion have called upon the people to follow ideals of National Poet Kazi Nazrul Islam to establish universal humanism against injustice, inequality and communalism in the society.

They made the call at the discussion in a special function organised by Rangpur Sahitya-Sangskriti Parishad (RSSP) on its office premises here on Friday night to celebrate the 119th birth anniversary of the national poet.

The RSSP, a literary-cum-cultural organisation, chalked out programmes like recitation of Nazrul poems and self-composed poems dedicated to Nazrul, rendering Nazrul's songs, Hamd and Na'at and cultural evening to pay due respect to the great poet.

Founding president of RSSP and former head of the Department of Bengali of Rangpur Carmichael College Professor Muhammad Alim Uddin attended the function as the main discussant.

Former head of the Department of Bengali of Rangpur Begum Rokeya Government College Professor Md Shah Alam presented keynote essay on 'Revolution of farmers in literature of Nazrul' on the occasion.

Noted cultural and literary personalities Monwar Hossain and Dr Mofizul Islam Mantu, among others, took part in the open discussion.

Professor Alim Uddin stressed on properly evaluating the unparallel literary works, ideals and human philosophy of Nazrul and conducting more research on his literary works in all higher seats of education of the country.

Terming rebel poet Nazrul as a great philosopher, the chief guest urged the common people to follow his ideals for establishing an enlightened society based on universal humanism, justice and equity.