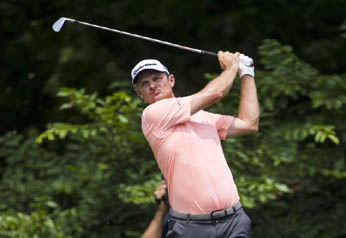 LOS ANGELES, May 27, 2018 (BSS/AFP) - Justin Rose got off to a sizzling start in sweltering conditions Saturday, then held on to push his PGA Fort Worth Invitational lead to four shots with a third-round 66.

His 14-under par total of 196 put him four clear of another US Open winner, Brooks Koepka, and Argentina's Emiliano Grillo.

After a two-putt birdie at the par-five first, Rose drained putts of eight feet and 19 feet at the second and third to separate himself from the field.

"I'm happy with the way I played, obviously," Rose said. "It was nice to get going, nice to build up that lead. No one seemed to do too much behind me today, so it felt like it was in my hands to get as far ahead as I could."

Koepka, warming up for his defense of the 2017 US Open crown at Shinnecock in June, rolled in a 16-foot birdie putt at 18 to seize a share of second with a three-under par 67 for 200. With five birdies on the day he overcame a double-bogey seven at the 11th -- his second double at the par-five hole this week.

Grillo, who started the day one shot off Rose's lead, couldn't build much momentum.

He opened with eight straight pars before his first birdie of the day at the ninth, then played the back in even par with a birdie and a bogey for a one-under 69.

It was a further two strokes back to a group headed by world number four Jon Rahm of Spain, who birdied five of the first eight holes -- including three in a row from the sixth through the eighth -- en route to a six-under 64.

He was joined on 202 by Canadian rookie Corey Conners, who had eight birdies in a seen-under par 63, as well as South African Louis Oosthuizen (64), JT Poston (65) and Ryan Armour (66).

Rose, who also birdied six and 11, made his lone bogey with a three-putt from the fringe at 16. He admitted that he struggled with the heat in the latter stages of his round.

"I really felt I was battling the golf course and my concentration a little bit," said Rose, whose most recent win came in December's Indonesian Masters. "It was kind of tough to finish it off in the heat today."

Koepka, playing his fourth tournament since he was sidelined for 15 weeks with a wrist injury, said he played "OK."

"I'm putting really well," he said. "Eleven has my number this week -- I don't know what's going on. Two doubles there, a par-five I need to be eating it up. If I can just figure out a way to play that hole I should be just fine."

Rose, the 2013 US Open winner and 2016 Olympic gold medalist, notched victories in Turkey and Shanghai last year, his victory in the WGC-HSBC Champions counting toward this season's PGA Tour win tally.

The 37-year-old said taking a four-shot lead into the final round would be a balancing act.

"You're always kind of caught between trying to go out and play great and trying to not make mistakes," he said, but added that he couldn't afford to be too conservative.

"I feel like there's a score in this golf course. I've got to expect the chasing pack to play well."