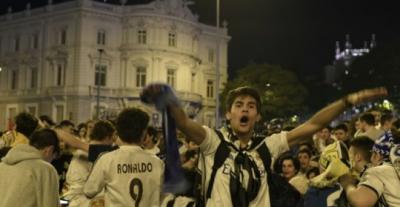 MADRID, May 27, 2018 (BSS/AFP) - Following a night of celebrations, Madrid prepared Sunday to give Real Madrid players a hero's welcome after the Spanish giants won their third Champions League title in a row in Kiev.

The team is scheduled to arrive at the club's traditional celebration spot, the Plaza de Cibeles, at 8:15 pm (1815 GMT) and then head to Real's Santiago Bernabeu stadium where a huge party will be held from 10 pm.

Just before hitting Cibeles they will meet with Madrid mayor Manuela Carmena and the head of the regional government of Madrid, Angel Garrido, at the nearby city hall.

Thousands of Real Madrid fans, many decked in the club's famous white team jersey, packed Plaza de Cibeles late on Saturday after the club won a record- extending 13th European Cup with a 3-1 victory over Liverpool -- and many said planned to return on Sunday.

"The players will come here and we are going to celebrate with them, because they are the best, Cristiano Ronaldo, Sergio Ramos, all of them! They are the best, they had a great match and they deserve it," Real fan Asta Saulaji told AFPTV at the Plaza de Cibeles. Many fans headed to the central square after watching the match at the Bernabeu on eight giant screens.

Tens of thousands of Real Madrid fans at the stadium erupted in delight at the final whistle, breaking out in familiar chants of "Campeones, campeones".

"This is incredible. Its beautiful belonging to Real Madrid, this is incredible," said Jose Manuel Rodriguez, a 50-year-old barman who came to Madrid from the northern Basque region to watch the match at the Bernabeu.

"That is what Real Madrid has, it gives so much joy," he added.

The club's "decimotercera," or 13th title in the competition, moved them six clear of second-placed AC Milan in the all-time honours list, after lifting the trophy for a remarkable fourth time in five seasons.

Spanish Prime Minister Mariano Rajoy, a die-hard Real fan, sent a telegram to the club's president, Florentino Perez, to congratulate the team for their victory, which he said had "revalidated" the club's "continental leadership" and "inscribed it with gold letters in the book of the best football in history".

"Thank you for this sporting show that filled all sports lovers with emotion and pride, and for once again taking Spain's name to the highest levels of world sport," he added in the telegram, his office said in a statement.

Rajoy had planned to watch the match in person in Kiev but he cancelled the trip at the last minute after the main opposition Socialist party filed a no- confidence motion against his government in parliament.

Carmena, Madrid's mayor, wrote on Twitter that she was "excited to have watched Real Madrid's overwhelming triumph in person in Kiev."

Real's victory made the front page of all main Spanish newspapers on Sunday.

"Madrid dominates Europe with a legendary team," headlined top-selling daily El Pais below a photo of Ramos holding up the Champions League trophy surrounded by the ream of his teammates.