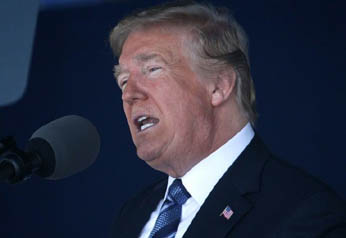 WASHINGTON, May 27, 2018 (BSS/AFP) - President Donald Trump calls it "Spygate": the FBI, he alleges, infiltrated his 2016 presidential campaign at the direction of the then-ruling Democrats in an "illegal" operation he has now ordered the Justice Department to investigate.

There is no proof yet of Trump's allegation.

But the Federal Bureau of Investigation's long history of mixing in politics -- from the long reign of J. Edgar Hoover to Watergate and "Deep Throat" -- makes it a potent accusation that could carry weight with American voters.

Since its beginnings, the bureau has burrowed, stumbled and been pulled into US politics at the highest levels, facing perennial charges that it abuses its power.

From the 1930s through the 1960s, legendary FBI director J. Edgar Hoover was a virtual nerve center of Washington politics, doing favors for some politicians -- and collecting dirt on others -- to ensure they worked with him.

Hoover operated as an ally of presidents and a threat to their enemies. Historical records show president Franklin D Roosevelt regularly asked him investigate rivals.

"He was often called on to obtain scuttlebutt on particular politicians. He did this routinely with presidents, all through his tenure."

Subsequent presidents reached accommodations. John F. Kennedy was wary, knowing Hoover had evidence of his affair with a woman with Mafia ties.

The FBI czar was closer to president Lyndon Johnson, who, according to Douglas Charles, a historian at Pennsylvania State University, got the FBI to spy on his own party during the Democratic National Convention in 1964.

- Watergate: FBI vs the president -

Hoover resisted when Richard Nixon sought to centralize intelligence collection in the White House after becoming president in 1969, Charles wrote in a recent essay for The Conversation.

Hoover died in 1972, and Nixon's choice to replace him, L. Patrick Gray, promised a closer relationship. When the Watergate scandal erupted, Gray, as acting director, fed information on the FBI's investigation to White House aides.

But at the same time, the deputy FBI director Mark Felt, aka "Deep Throat", was surreptitiously leaking tips to Washington Post journalists, helping them break open the scandal.

Ultimately Gray's protection of the White House killed his nomination, after he admitted to destroying Watergate-related documents. Nixon, caught up in his own lies and coverups and threatened with impeachment, was forced to resign.

After Watergate, said Charles, FBI directors resolved to keep a greater distance from presidents, with the attorney general standing between them.

That also made them a bigger threat. President Bill Clinton spent his scandal-plagued eight years as president under the microscope of a hostile FBI director, Louis Freeh. The tensions hit a peak in 1998 when the FBI had to take a blood sample from Clinton to see if the DNA matched semen on intern Monica Lewinsky's dress.

Ultimately, that led to Clinton's impeachment. But the FBI also emerged tattered.

In 2004, Clinton said Freeh attacked him to divert pressure over some serious bureau mistakes.

"I really do think he woke up one day and said, there's only one sure way I can get the Washington press and the Republicans off my back, and that's if I take a hostile position towards the White House, and he did," he said.

The 2016 election caught the bureau in its most politically charged situation of its entire history.

In a heated presidential race, it found itself investigating both candidates -- Democrat Hillary Clinton over the use of an unsecure private email server while she was secretary of state; and Trump, indirectly, over suspicious contacts between members of his campaign and Russians with links to the Kremlin.

Then-FBI director James Comey has been attacked from all sides for how he handled the parallel cases. The Clinton probe was made public in a way that she says doomed her campaign, and the Trump probe was kept secret, effectively helping him.

On becoming president, Trump appeared to seek the kind of FBI relationship presidents had in the Hoover days -- a transactional alliance. He asked Comey to pledge his loyalty, and end the Russia probe. When Comey refused, Trump fired him.

Comey was philosophical about it. "The statue of Justice has a blindfold on because you're not supposed to be peeking out to see whether your patron is pleased or not with what you're doing," he later told Congress. "It should be about the facts and the law."